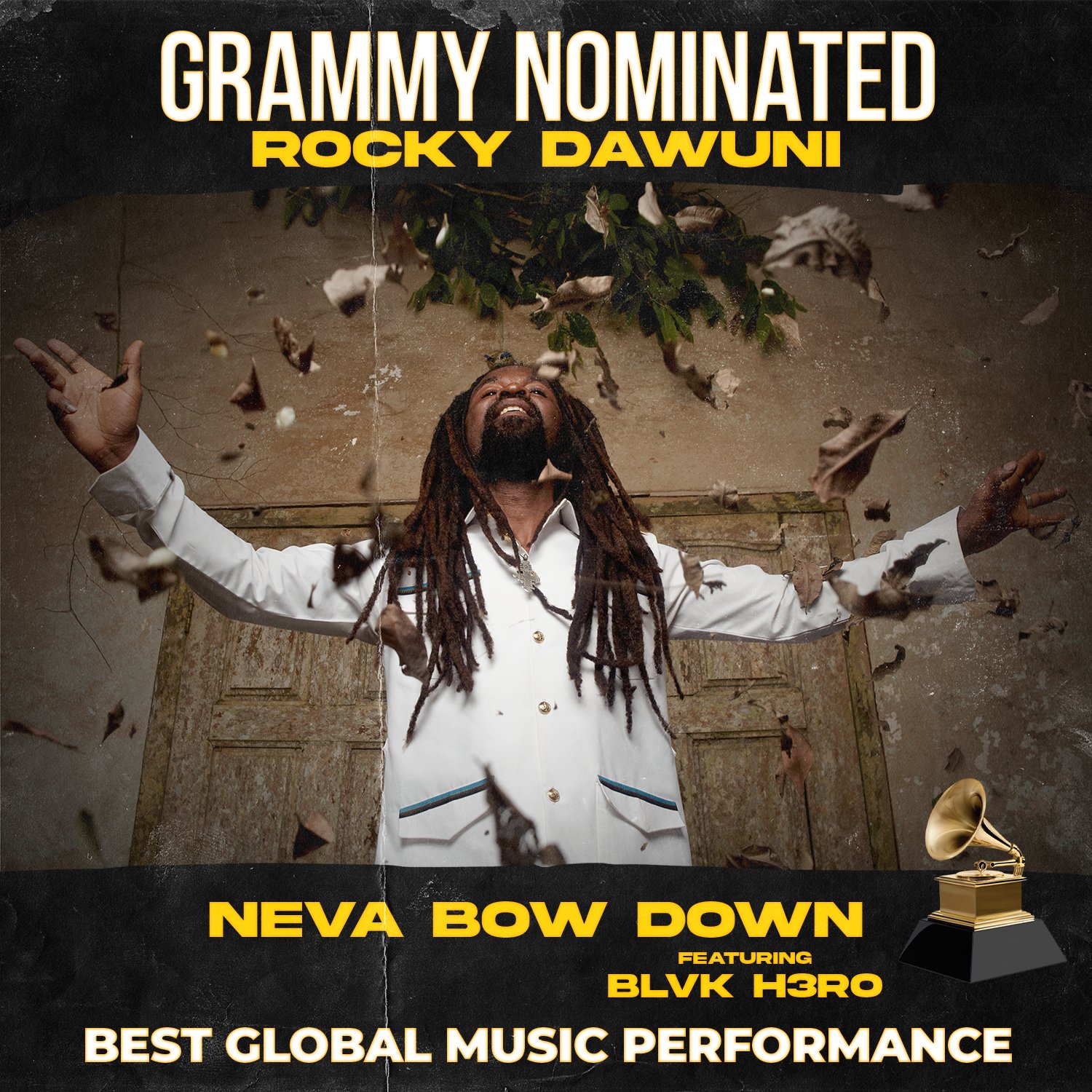 Rocky Dawuni has just received his 3rd GRAMMY Nomination for “Best Global Music Performance” for his new single
​“Neva Bow Down !!” Rocky has the distinction of being the first Ghanaian to have ever been nominated for a GRAMMY award. His previous nominations were for “Best Reggae Album” Branches of the Same Tree, 2016 and “Best Global Music Album” Voice of Bunbon, Vol. 1, 2021. He has now been nominated in three different GRAMMY categories.
​
On “Neva Bow Down” Rocky teamed up with rising Jamaican star
​Blvk H3ro to release a global roots anthem. The powerful track distills elements of Pop, Dub, and Reggae for a modern take on “rebel music.” The collaborative spirit of “Neva Bow Down” brings into focus the synergy of Africa and the Afro-Descendant Diaspora weaving a tapestry of melodies with a memorable chorus on top of producer Bob Riddim’s speaker busting production. This protest anthem is a narrative on the current state of global affairs and the power of the collective to change the course of history, serving as an inspiration for people to stand up for what is right and true.

When elaborating more on the message behind “Neva Bow Down” Rocky states “In a time when our world is at crossroads with systems and society confronting fundamental changes, there is a crucial need to speak truth to power, to challenge the status quo and to inspire people to find the courage to create a restorative vision of the future that defends the core essence of who we are as human beings and our interconnectedness to nature.” When speaking about the striking video for the song, directed by long time Ghanaian collaborator, Slingshot, Rocky states; “The video for “Neva Bow Down” is a picturesque narrative depicting the rising voice of the youth to understand and articulate their need for systemic change and inclusion. It is a thoughtful and beautifully shot visual feast of confrontation of an awakened people and the systems that seek to impede them.”

​
Rocky Dawuni’s signature Afro Roots style is a musical genre that reflects modern Africa. It is built upon the foundation of using cultural styles and integrating current innovations to create music that is inspiring, soul stirring, danceable and groovy. It is based on African Highlife music, afrobeat and global sounds. Dawuni’s charisma and galvanizing performances have endeared him to crowds around the globe where he has shared the stage alongside luminaries including Stevie Wonder and Angelique Kidjo, among many others. As a dedicated activist, Rocky has been a leading voice for social and environmental transformation and currently serves as UN Goodwill Ambassador for the Environment for Africa, amongst other designations. Rocky believes “that music is the medium to strike a chord that transforms our collective intentions into a vehicle for positive social change.”
​
​Rocky Dawuni “Neva Bow Down”
featuring Blvk H3ro
​
Listen:
​https://distrokid.com/hyperfollow/rockydawuni/neva-bow-down-feat-blvk-h3ro​
​
​Watch Video:​
​https://youtu.be/GIsHlCJMUp4​